Dehumidifiers are used in raw tobacco warehouses for an optimum protection of the goods.

Carrying on a tradition

The refinement of raw tobacco is considered a fine art. Far from the major tobacco industry smaller factories produce special mixtures with highly diverse flavours. But here, too, the firms usually have to purchase the raw tobacco, coming from many parts of the world, by container load. And since in most cases the product is not processed all at once, the tobacco leaves have to be stored away carefully. This is the only way to preserve the outstanding quality and special flavours. Professional air conditioning in the storage facility can even be of benefit to additional ripening and aroma development. Such optimum climate conditions are generated by employing the Trotec industrial dryers of the DH series.

The noticeable fall in demand for customary cigarettes opposes the still coveted premium cigars and special types of tobacco: They are a status symbol and regarded as tobacco use extraordinaire. The most noted and sought-after cigars still come from Cuba, Brazil and the Dominican Republic. The tobacco leaves are hand-picked. Then the plants are cured for up to 50 days – placing them by turns in the sunshine or shade. The sub-tropical climate proves advantageous for the aroma development. But there are also special ventilated storehouses. That is where the ripening process sets in, for during storage the moisture content in the leaves is reduced. This curing process is followed by fermentation. During fermentation – which can take several months depending on the variety of tobacco – the aromas develop.

Of course part of the raw tobacco is processed in the producing countries. But it is also shipped for the further processing in our factories. It is imperative to keep up the prudence and tradition of the tobacco manufacturers from the countries of origin – for reasons of quality assurance and to preserve the special tobacco flavour. Since most tobacco manufacturers can purchase the product only by container load, but are unable to process the lot all at once, particular attention needs to be paid to the raw tobacco storage. Unmanufacured tobacco is very delicate and sensitive to changes in the weather. If the humidity level in the storage space is too low, the leaves quickly dry out, begin to crumble and lose their flavour. If the humidity level is too high, there is a danger of mould stains and mildew. Both can eliminate entire stocks in next to no time. Concerning the storage of raw tobacco, manufacturers demonstrate true instinct by employing sophisticated air conditioning systems in their storage facilities. With the industrial dryers of the DH series Trotec guarantees optimum climate conditions for storing unmanufactured tobacco.

Cold, dry and well ventilated is what you want in a raw tobacco warehouse. In stationary continuous operation the professional dehumidifiers of the DH series make a good job of ensuring the optimum conditions. The dryers operate on the principle of condensation and guarantee a particularly high dehumidification performance. They are manufactured of hard-wearing high-quality components making them especially low in maintenance and able to provide an optimal dehumidification performance even in aggressive industrial surroundings. Furthermore, the models are extremely economical. The DH industrial dryers are set up in just a few steps and can be adjusted perfectly for every environmental requirement. An additional advantage: Some devices are delivered ready for use, already prepared for wall mounting and optionally available with a condensate pump.

The appropriate model for every demand

Whether it is stored in small rooms or large facilities – raw tobacco deserves the best possible storage climate. Our consultants of the Trotec industrial services team will gladly lend their support in planning the necessary capacities and selecting the appropriate models to make sure that every room is equipped with the perfect air-conditioning system. 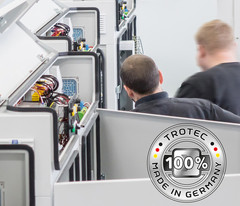 Upon request, we will readily produce tailor-made desiccant dehumidifiers as special models “made in Germany” perfectly geared to your needs, e.g.:

Makes use of the possibility of having special models with tailored components for your individual needs planned, designed and manufactured in close consultation with our specialists.
Click here to find out more ...