In view of the cold winter and outside temperatures in the minus range, the question arises how practical and effective window ventilation, which is recommended by the Federal Environment Agency (UBA) and the Conference of Ministers of Education and Cultural Affairs, is as an infection control measure. Contrary to the opinion of the UBA and the Ministers of Education that regular shock ventilation is sufficient and that there is currently no better technical solution to remove potentially infectious aerosols from classrooms, for example, many scientists and internationally renowned aerosol experts recommend the use of high-performance air purifiers with HEPA filter technology complying with EN 1822 – as a more effective alternative to window ventilation.

Airing is problematic and only effective under optimum conditions 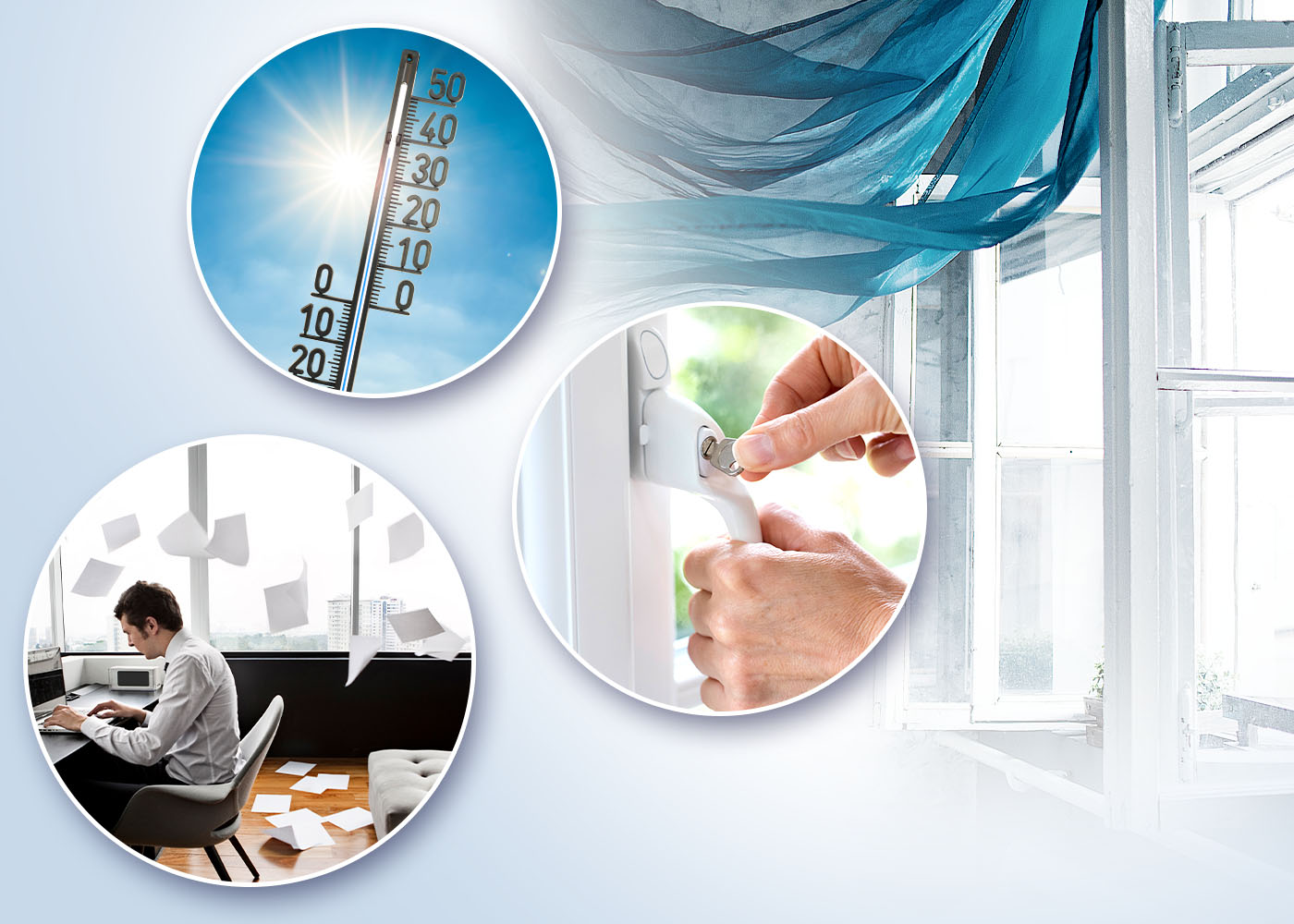 Most rooms, especially classrooms, only have windows on one side of the room, so that only shock ventilation is possible in these rooms. However, the exchange of air with the outside air takes place much more slowly with shock ventilation than with cross ventilation – and only if there is a sufficiently large temperature difference between the inside and outside air or if the wind is strong enough.

If the temperatures are almost identical and if there is no wind, there is almost no air exchange. This means that window ventilation in the summer and in the comparatively mild autumn only has a protective effect in case of continuous airing! In the winter, with a higher temperature difference, there may initially be a good air exchange, but only for a short time and with decreasing effect. Due to the cold air supplied from outside, the interior space gradually cools down so that the required temperature difference becomes increasingly smaller.

The result: the air exchange practically comes to a standstill during ventilation.

Mr Schulte-Mattler, teacher at the Apostelgymnasium Cologne: "At the moment we have been keeping the windows open for 10 minutes and still the CO2 level does not go down."
Excerpt from the WDR programme Markt on 18/11/2020 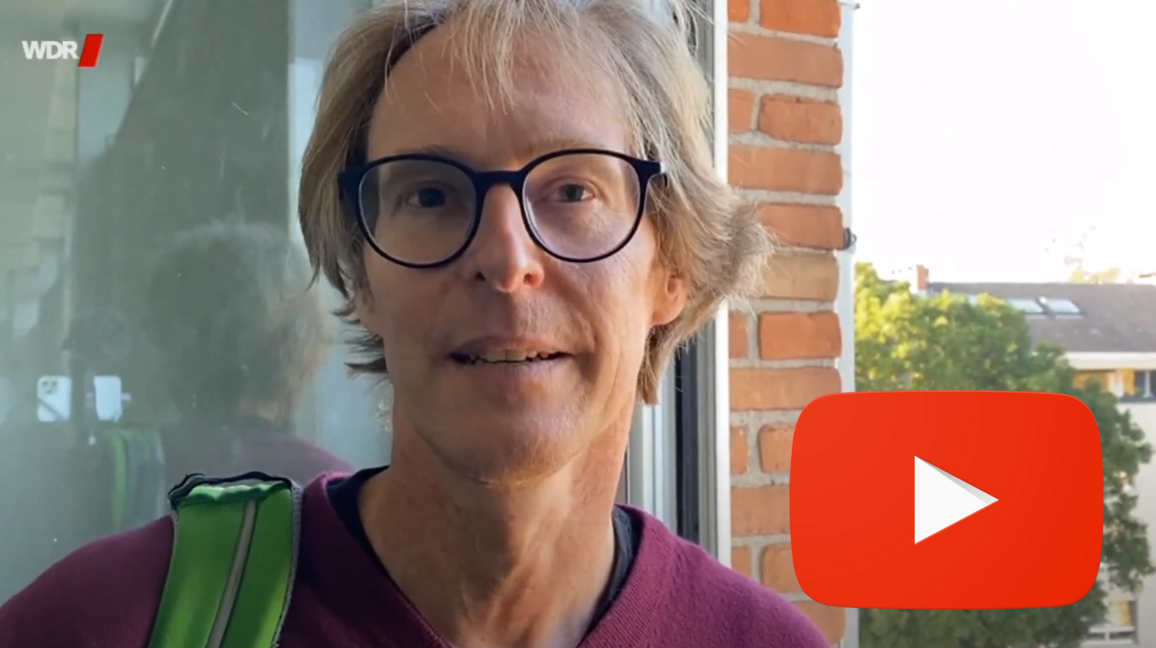 Most of the time, especially in the winter, the room is aired too briefly in order to prevent it from getting too cold. However, the amount of air thus exchanged is far from enough. In this context, Eberhard Bodenschatz, Director at the Max Planck Institute for Dynamics and Self-Organization in Göttingen, commented on the subject of ventilation in the news magazine "Der Spiegel" : "You just have to find out the temperature difference between indoors and outdoors. If the temperature outside the door is 10 °C and inside the room 20 °C, you will have renewed 50 % of the air as soon as you measure 15 °C inside the room after airing. Areas where ... the temperature does not change when airing should better be avoided".

So with an outside temperature of 0 °C in winter, 50 % of the aerosols would not have been removed from the room until the room temperature was only 10 °C! The statement of the UBA, published in the handout on ventilation in schools, that the temperature in the room only drops by a few degrees with both cross and shock ventilation is therefore highly questionable. In order to achieve the 3-fold air change recommended by the UBA in this way alone, the room would have to be cooled down to 10 °C by ventilation 6 times per hour.

The statement of the UBA that by airing for 3–5 minutes every 20 minutes 'the room air is completely exchanged for fresh air from outside three times an hour' is at least misleading. Especially with shock ventilation, there is no complete, direct exchange of air in the room, but rather a mixing of the stale, virus-laden room air with fresh, clean outside air. In this process, the virus-laden aerosol particles are not completely aired out of the room, as the UBA's wording suggests, but their concentration is diluted, just as with air cleaners. With the difference that the performance of an air cleaner is known, reliable and adjustable, whereas the effectiveness of window ventilation varies greatly depending on the weather situation.

Regardless of the effectiveness, open windows are a pure waste of energy when outside temperatures are low. Airing several times an hours cools down interior spaces, the precious heat energy escapes unused through the window – while the people inside the room are freezing. Additionally, the air supplied from outside must be heated again and again before being replaced by cold air again during the next ventilation interval. This not only contradicts the efforts of national climate policy, it also inevitably leads to immense additional costs.

Both employers and schools have a duty of care to their employees or pupils. They have to make sure that they do not suffer any harm from too high or too low temperatures. The Workplace Regulation A3.5 specifies room temperatures that are beneficial to health as follows:

However, shock ventilation in the winter does not only lower the room temperature by a few degrees as the UBA states in its infographic "Airing properly in everyday life". The room temperature drops to values around 15 °C in next to no time and is therefore below the values required by law.

Airing is "noisy" and disturbs lessons

According to the UBA, road traffic has long been the dominant source of noise in Germany. The agency states that 2.3 million people in Germany are exposed to noise levels exceeding 65 dB(A) all day. "Road traffic noise disturbs or annoys more than half of the German population", says the UBA website. And this noise enters classrooms through open windows. The lessons become more susceptible for disturbances from outside and this in turn leads to a lack of concentration, teachers therefore point out. 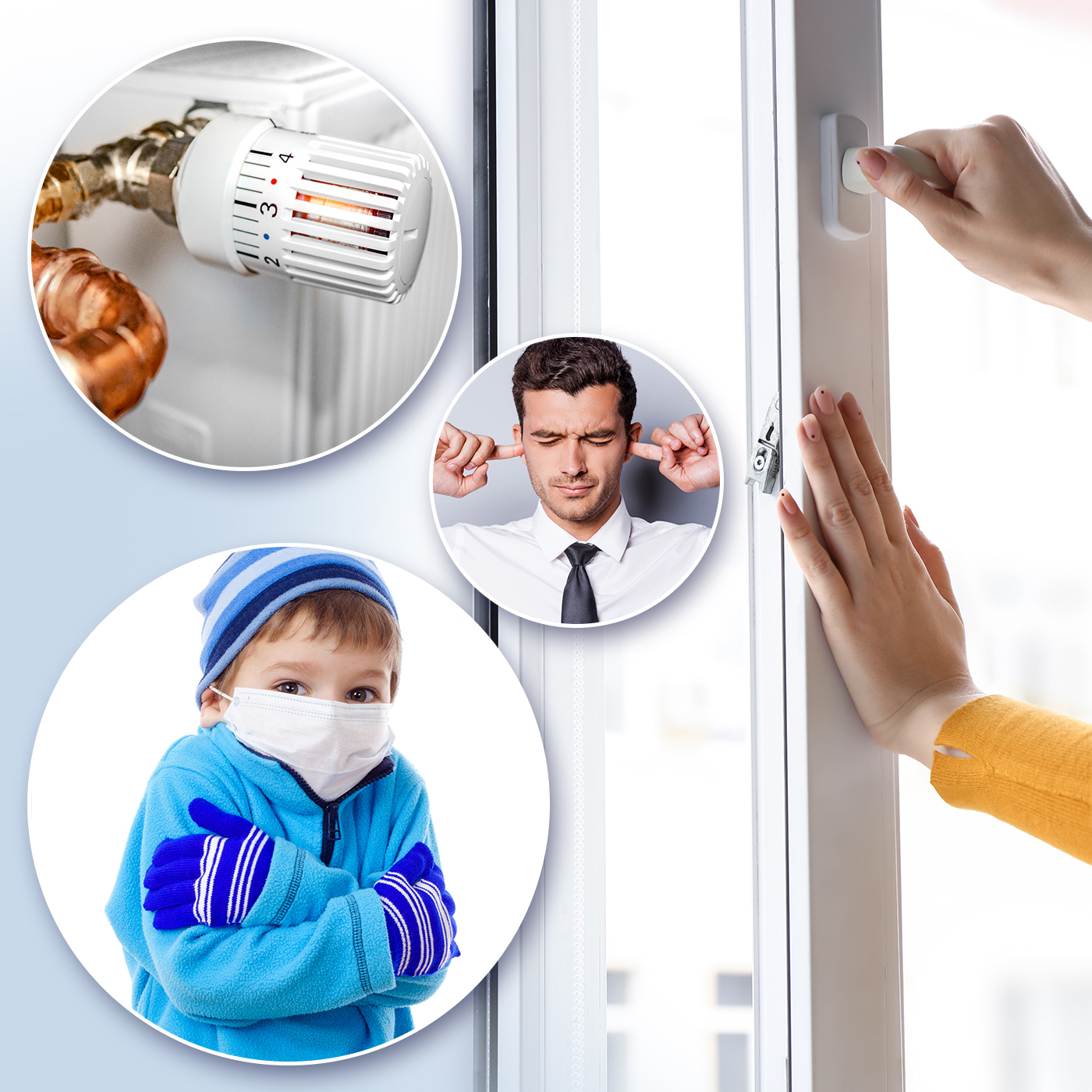 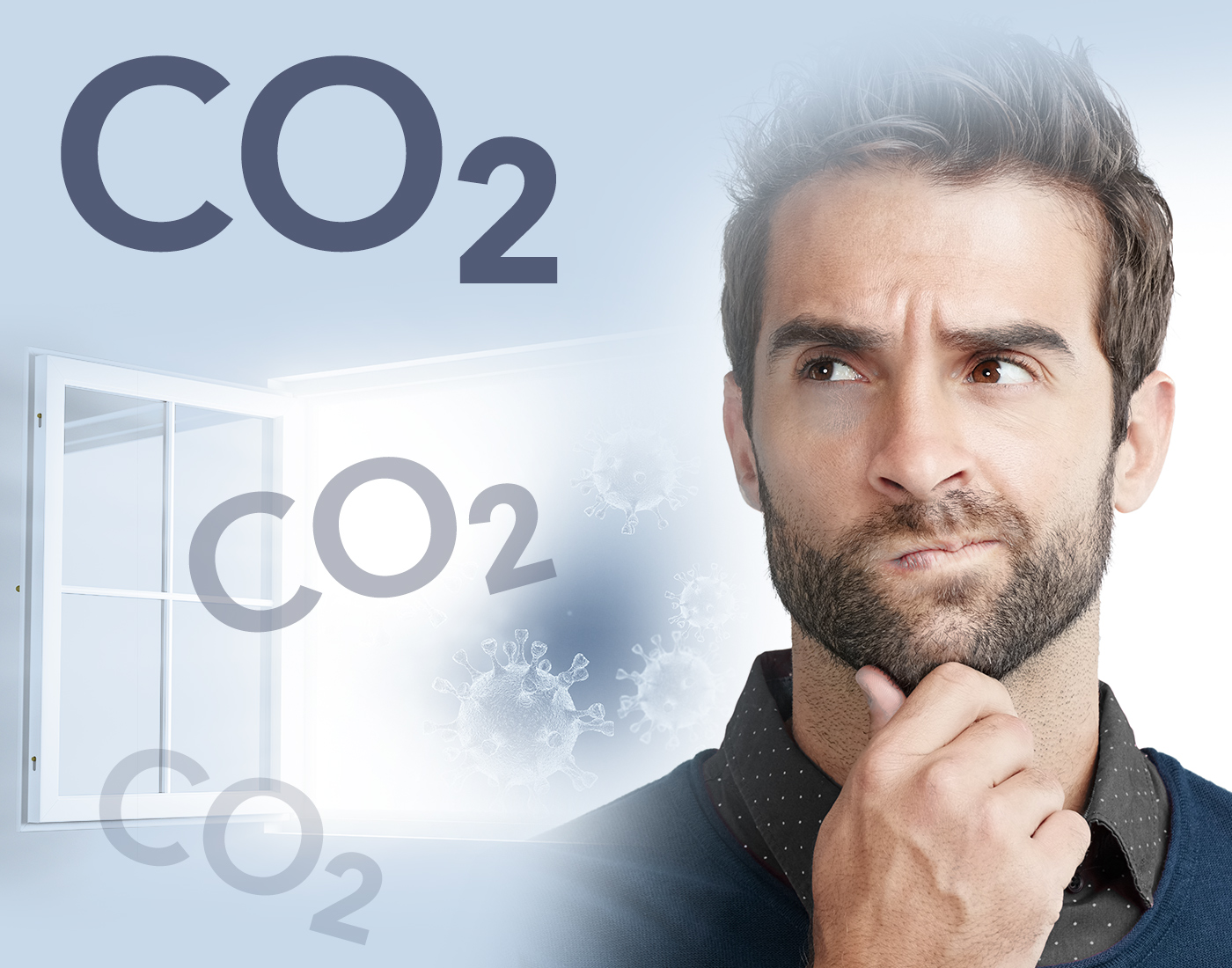 The CO2 emissions of people are approximately the same when breathing at rest, speaking or singing/shouting. The amount of aerosols emitted, however, depends on the number of infected persons inside the room and their activity. When speaking or singing, a lot more aerosol particles are exhaled than when breathing without exertion. Consequently, the virus load in a room can increase much faster than the CO2 level. These examples show why the measured CO2 value does not allow any reliable conclusions to be drawn about the aerosol concentration.

The UBA, too, writes in its "Ventilation recommendation for schools": An increased CO2 concentration does not permit any conclusions about aerosols containing viruses, but it does indicate that there has been no ventilation for too long and therefore the risk of infection may also be increased.

This is quite simple and logical. With 30 healthy pupils in a classroom, the CO2 concentration increases at a certain rate depending on the airing behaviour. If none of the pupils is infected, the concentration of virus-laden aerosol particles is low or even zero. But if several of these 30 pupils were infected with SARS-CoV-2, then the room could have a virus concentration causing an infection after only a short stay despite a low CO2 concentration in the room.

The CO2 content also increases in relation to the number of people present. If it took, for example, 30 minutes to reach 1000 ppm in a fictitious classroom with e.g. 20 people, it would take approx. 60 minutes if only 10 people were present. But still, one of these 10 people could be infected. This is why there might be a high infection risk even with a low CO2 level under these circumstances.

Experts warn: airing conveys a supposed sense of security at the expense of health

Despite massive criticism from renowned scientists, many decision-makers rely on the UBA recommendations, which are negligent from a scientific point of view, and thus endanger the health of those who have to work or learn with open windows every day. Yet numerous studies prove that the effectiveness of ventilation in the fight against the spread of the coronavirus is doubtful.

The correct behaviour and technical solutions are currently the only effective tools to contain infections and thus the costs for the state, the economy and the society.

In a comparative test, Dutch researchers from Delft University of Technology investigated how quickly aerosol concentrations in a room can be reduced by intense and cross ventilation, but also by ventilation systems and air cleaners.

Result: The best results were achieved in almost all test setups with a high-performance air purifier TAC V+. In addition, the measurement results prove that intense airing only allows for a comparatively low air exchange.

Here you can download the entire study as a PDF.

A comparison was made between two different installation positions of the air cleaner TAC V+ in the room, with three power levels (600/800/1200 m/h) each, and the effect of a ventilation system as well as with shock and cross ventilation via the windows and the door. The positive numerical values in the line marked in yellow prove that the number of particles in the air was higher in case of shock ventilation via two open windows on one side of the room than in all tests with the air cleaner TAC V+.

Shock ventilation via open windows or an open door yielded the worst results in all test runs! 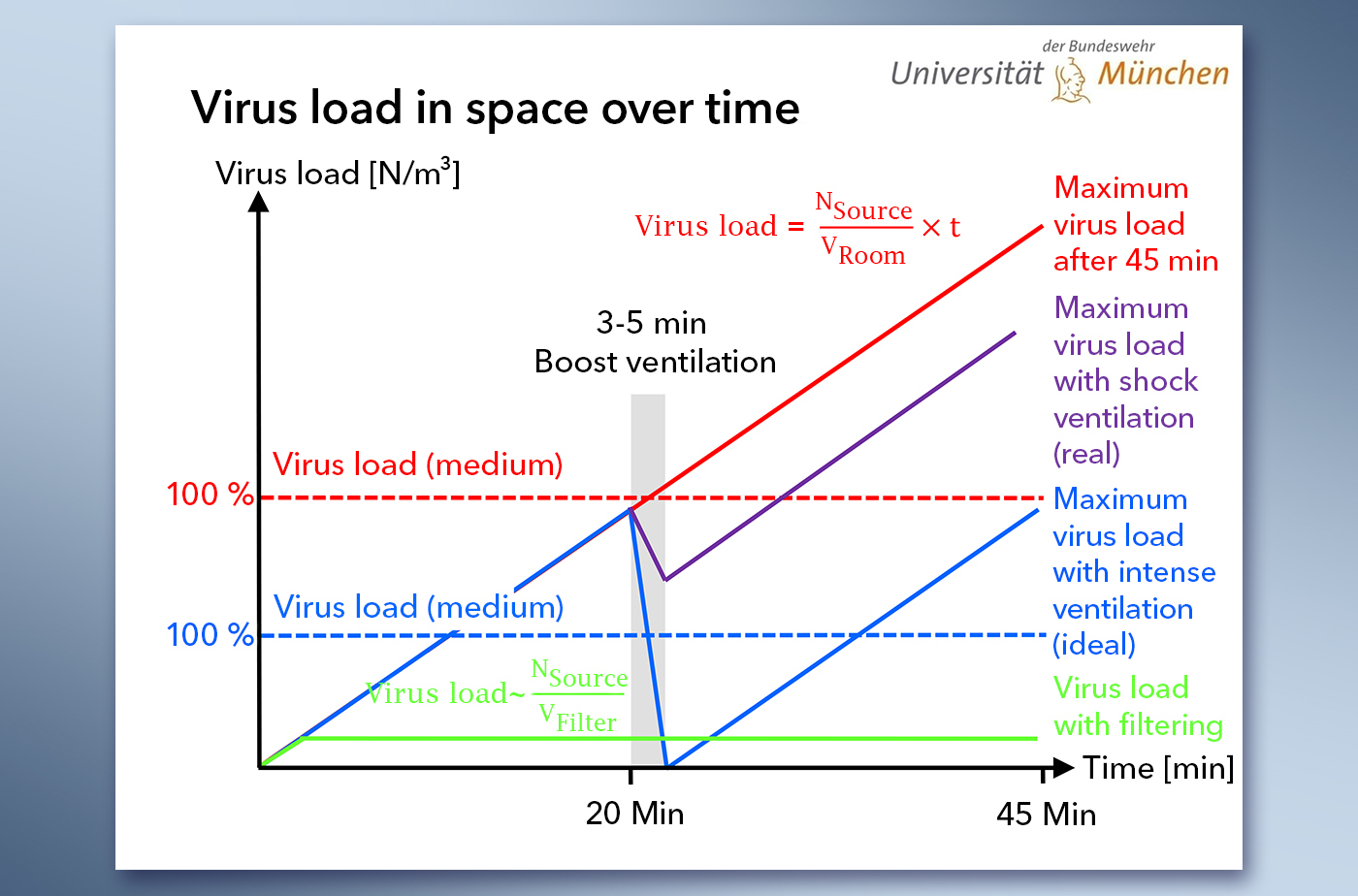 German Aerospace Center: Airing does not bring the desired success in the fight against the coronavirus

In a recent study, the German Aerospace Center, too, investigated the question of how effective window ventilation, which is recommended by the UBA, actually is.

According to Prof. Dr. Ing. Markus Raffel, the problem with window ventilation is that "even with all windows wide open, the air exchange rates required to reliably remove aerosols potentially containing viruses from the room cannot be achieved".

Airing every 20 minutes for 5 minutes means: no ventilation 90 % of the time

With perfect displacement ventilation, the virus load could only be reduced by slightly more than half (55 %) on average. In practice (mixed ventilation), much less is achieved! 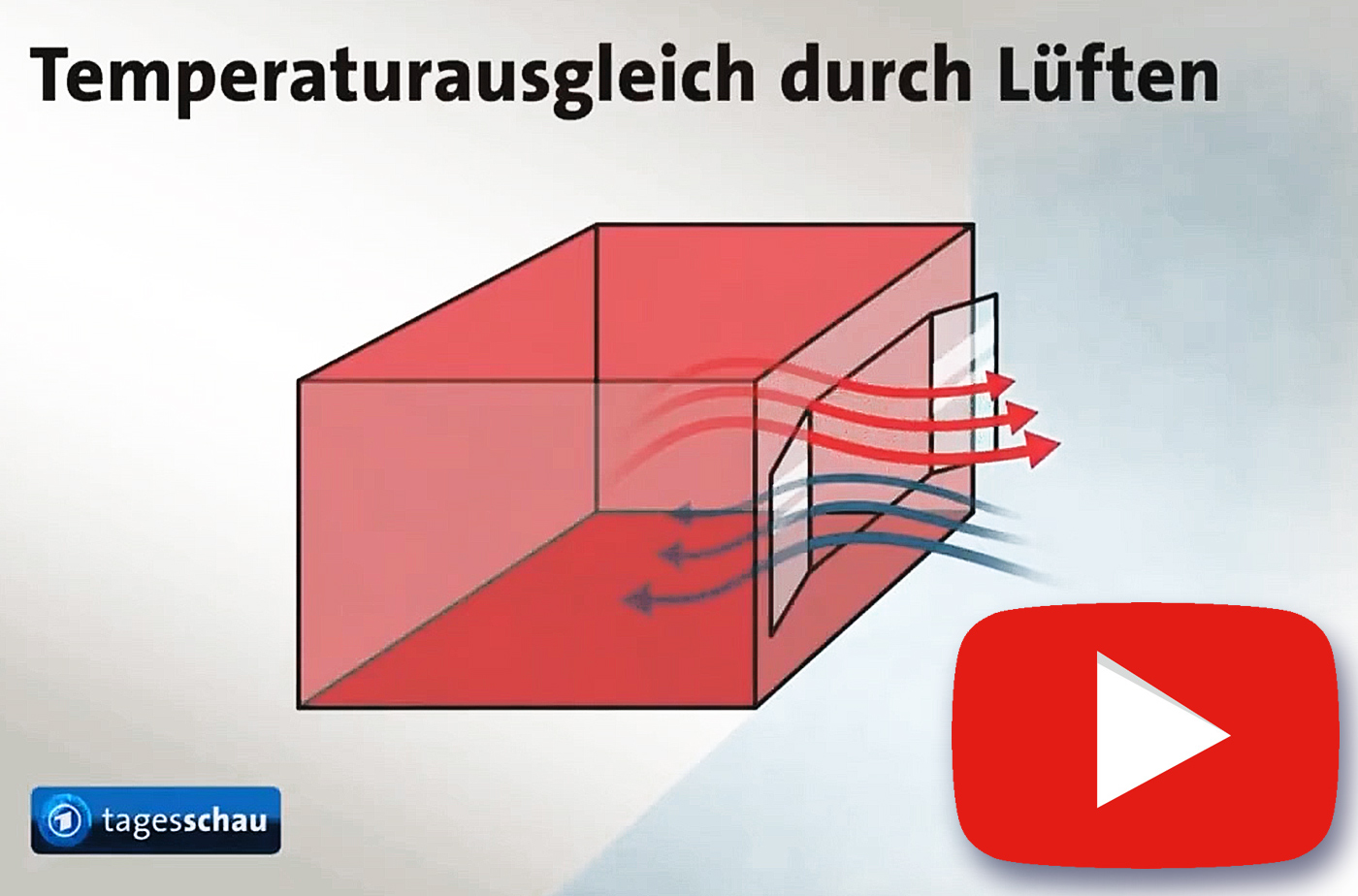 Professor Dr. Christian Kähler: comment on "Concept for ventilation in schools" of the UBA

"To reduce the risk of infection in classrooms, the UBA and its advisors recommend using free ventilation. They recommend opening all windows completely for 3–5 minutes every 20 minutes and 'after every lesson for the entire duration of the break even during the cold season'. They claim that this would only reduce the temperature in the room by 'a few degrees' and that the temperature would quickly rise again after closing the windows. The ultimate goal of this measure was to realise a 'threefold air change' per hour.

Why a threefold air change should be sufficient in case of a potentially lethal virus is not explained. [...]One cannot overcome the suspicion that the UBA and its advisors are trying to spread their scientifically unfounded opinions to offer other institutions legitimisation for their actions. This is fatal, because the ones who suffer are the children, young people, teachers and parents! Countless very well-informed parents, teachers, but also teachers' associations have publicly rebelled against the UBA recommendations. The fact that the UBA and its advisors completely ignore this swarm intelligence is incomprehensible." 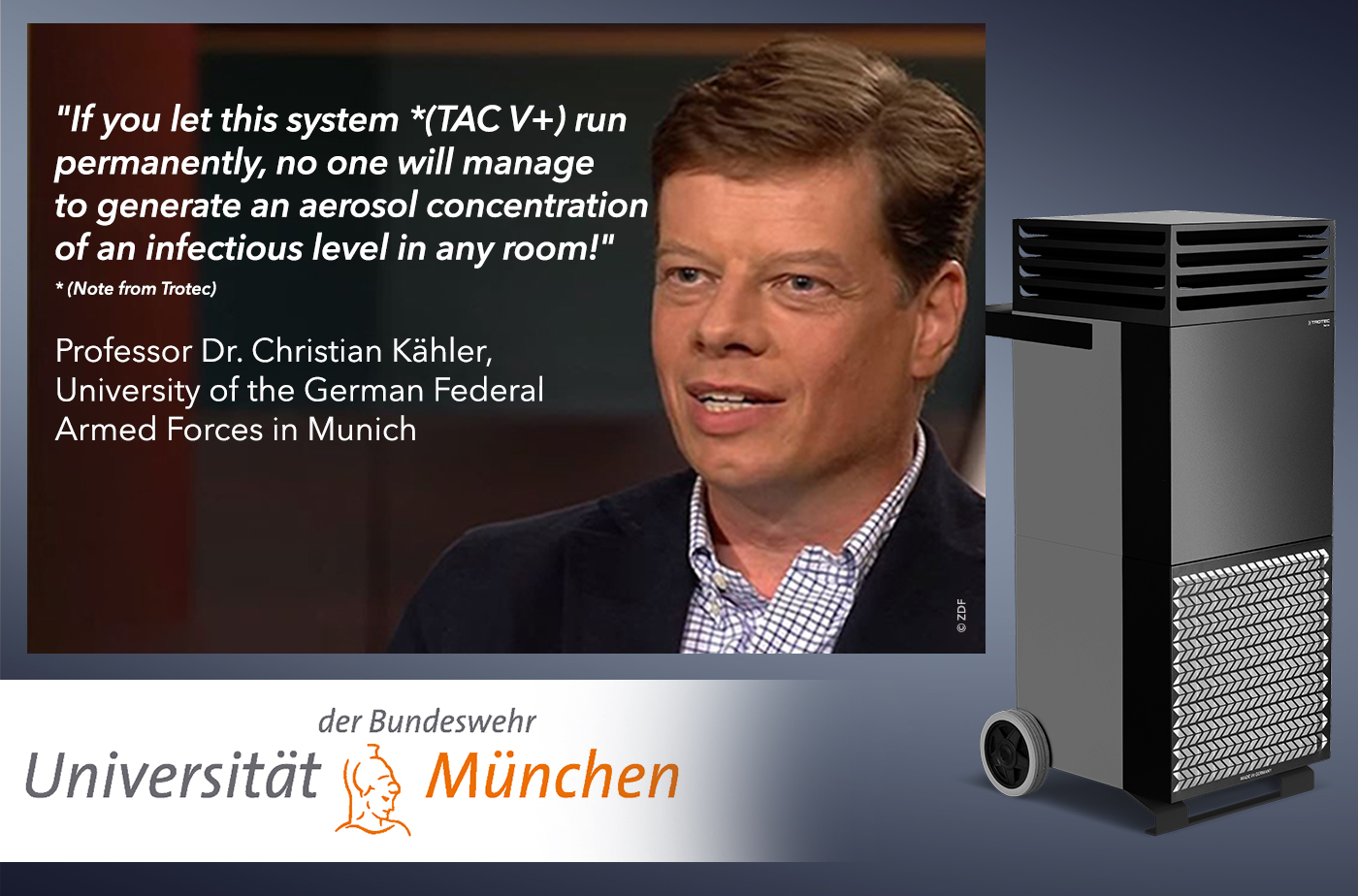