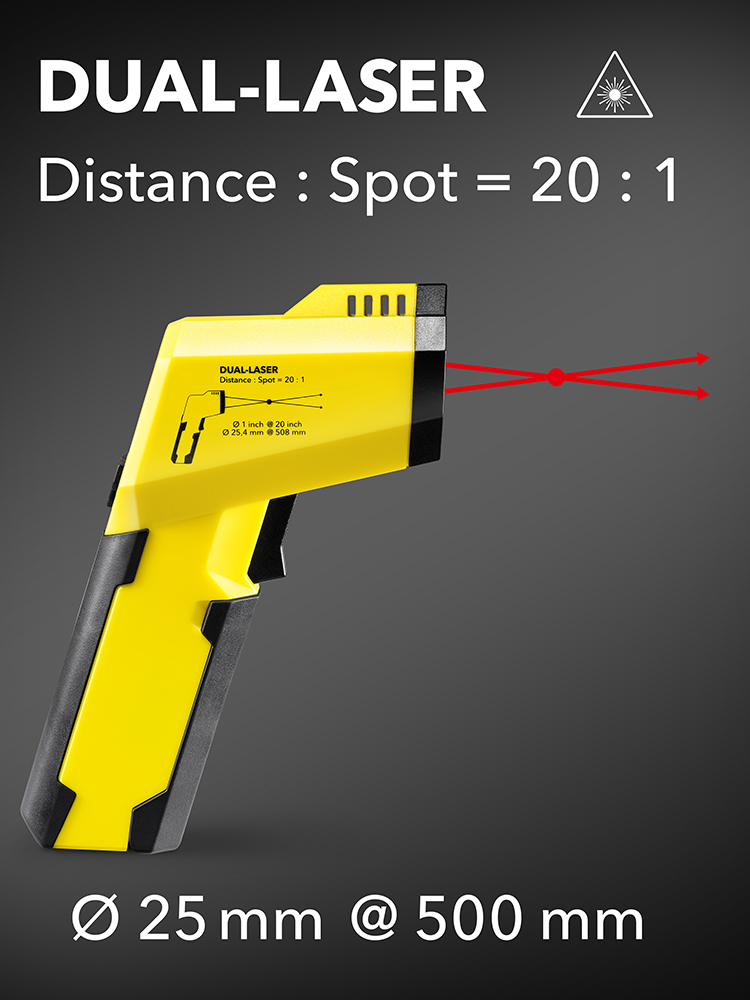 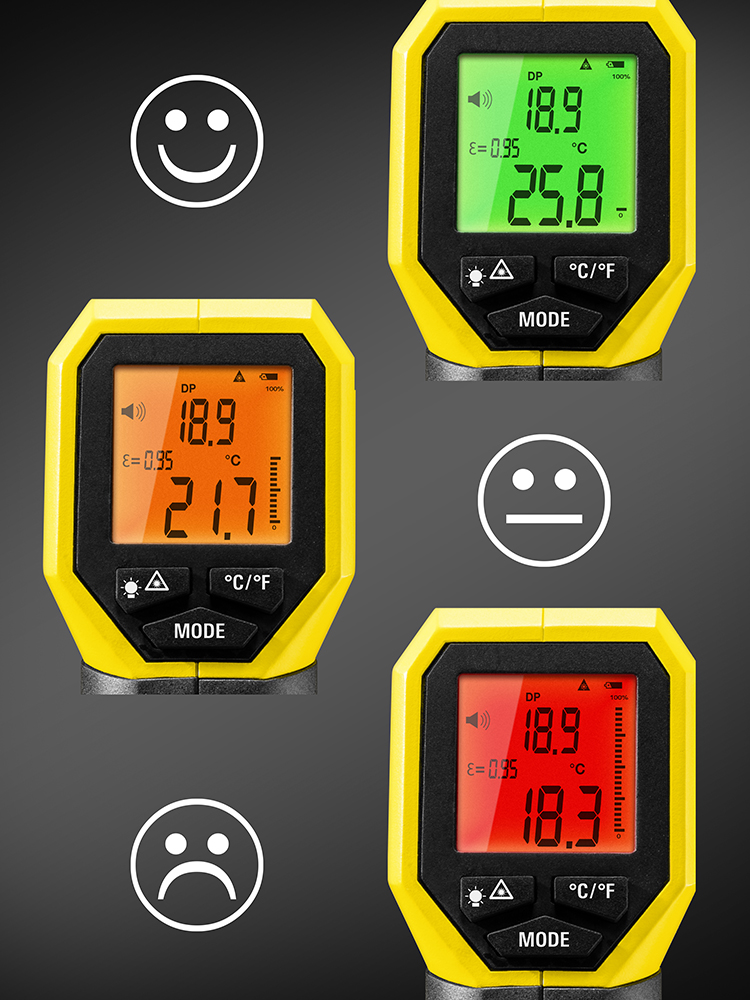 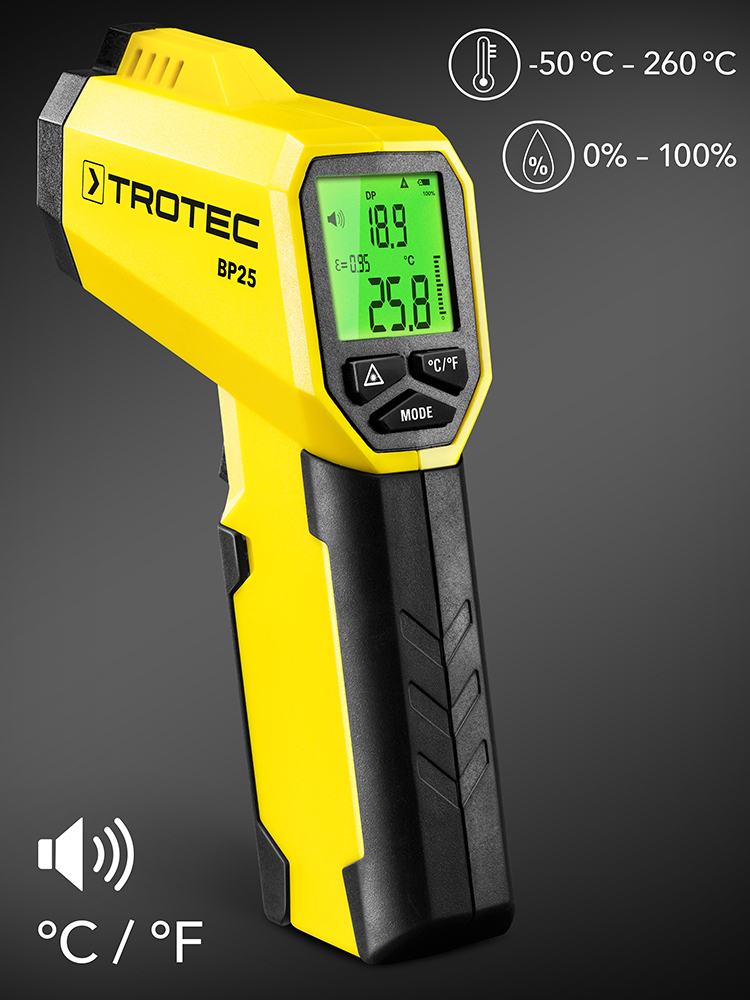 Rely on Trotec's BP25 – it was tested by the consumer comparison portal VERGLEICH.ORG and has been awarded for the best value-for-money ratio!

If condensate forms frequently at the same spot, it usually doesn't take long until mould grows as well. Used for private purposes or commercially – the high-quality pyrometer dew point scanner BP25 provides you with the opportunity to check surfaces such as interior walls and facades for cold spots with a high mould growth potential. Infrared non-contact surface temperature measurements at walls can be carried out quickly and easily; the dew point temperature is automatically determined at the same time. Even in unfavourable lighting conditions the measured values can easily be read on the neatly arranged backlit LC display. The measuring spot is displayed on the respective material to be measured by means of the integrated 20:1 dual laser.

In order to determine the dew point, the device additionally measures the current room temperature and the humidity level in the air. When it comes to larger measuring surfaces, the BP25 with its acoustic and visual alarm function, which is based on the traffic light principle, as well as its integrated bar graph indicator offers you quick information on whether or not the dew point at the measuring location has been reached or even fallen below and comes with an increased risk of mould growth due to condensation. Mould begins to form on material surfaces when they are exposed to an increased relative humidity of approx. 70 % for longer periods. For this reason, the BP25 warns you both acoustically and visually several degrees before reaching the actual dew point. So it pays to inspect cold spots at the wall with the BP25 in order to detect any condensation forming at an early stage.

Keeping an eye on the measuring spot at all times thanks to the 20:1 measuring optic

Is everything in the green range or is there a risk of mould growth?

In addition to performing infrared surface temperature measurements the BP25 can make use of an air temperature sensor and a humidity sensor (measuring range between 0 % and 100 % relative humidity), then the dew point temperature is automatically calculated from the 3 determined values. On top of the precisely displayed values an acoustic signal and/or the change of the LC display colour can optionally indicate whether or not the measured values are within the critical range. A green display indicates that everything is fine, orange means that the measured values are drawing near the critical dew point and a red display clearly warns you that the determined temperature is precariously close to the dew point or that is has already been reached or was even fallen below indicating the possibility of condensate formation. If desired, you can also work by ear, i.e. guided by the acoustic signal that will be emitted with increasing frequency.

Especially when measuring large wall surfaces the acoustic and/or visual alarm helps to quickly detect critical positions without having to pay attention to the precise measured values the entire time. The display also contains an easily comprehensible bar graph indicator. It serves for a quick orientation and illustrates schematically on a scale of 0 % to 100 % how close the measured values are to the dew point temperature.

Explained in easily understandable terms: What exactly is the dew point?

The room air that surrounds us contains moisture. Especially the humidity levels in the bathroom, kitchen or bedroom are often elevated. What can be said in general is that the warmer the air, the more water vapour can be absorbed. Conversely, though, this means that when warm, damp air meets a colder surface and the air cools down, the contained moisture condenses and forms ultra-fine droplets of water on the cold surface. Now, the so-called "dew point" or "dew point temperature" is the temperature value to be reached or fallen below in order for the room air to release the moisture in form of condensate. You probably know this effect from a cold mirror in the bathroom that immediately fogs up when you take a hot shower. Condensate forms particularly often at poorly insulated wall parts and so-called "thermal bridges", since the temperatures of interior walls there are often colder than the rest of the wall.

Be it in corners, behind wardrobes and cupboards, in the basement or attic, near doors and windows or on the inside of insufficiently insulated exterior walls – to determine whether or not there is going to be a risk of mould growth in the long run we recommend checking the wall temperature on a regular basis. Ideally perform the measurements at different times of the day (in the early morning, during the day, in the evening and at night), in varying weather conditions and in all seasons to make sure no condensate forms at those critical spots.

Once mould has formed, it is hard to get rid of. On the other hand, using the pyrometer dew point scanner BP25, a conclusive control measurement is carried out quickly and easily. 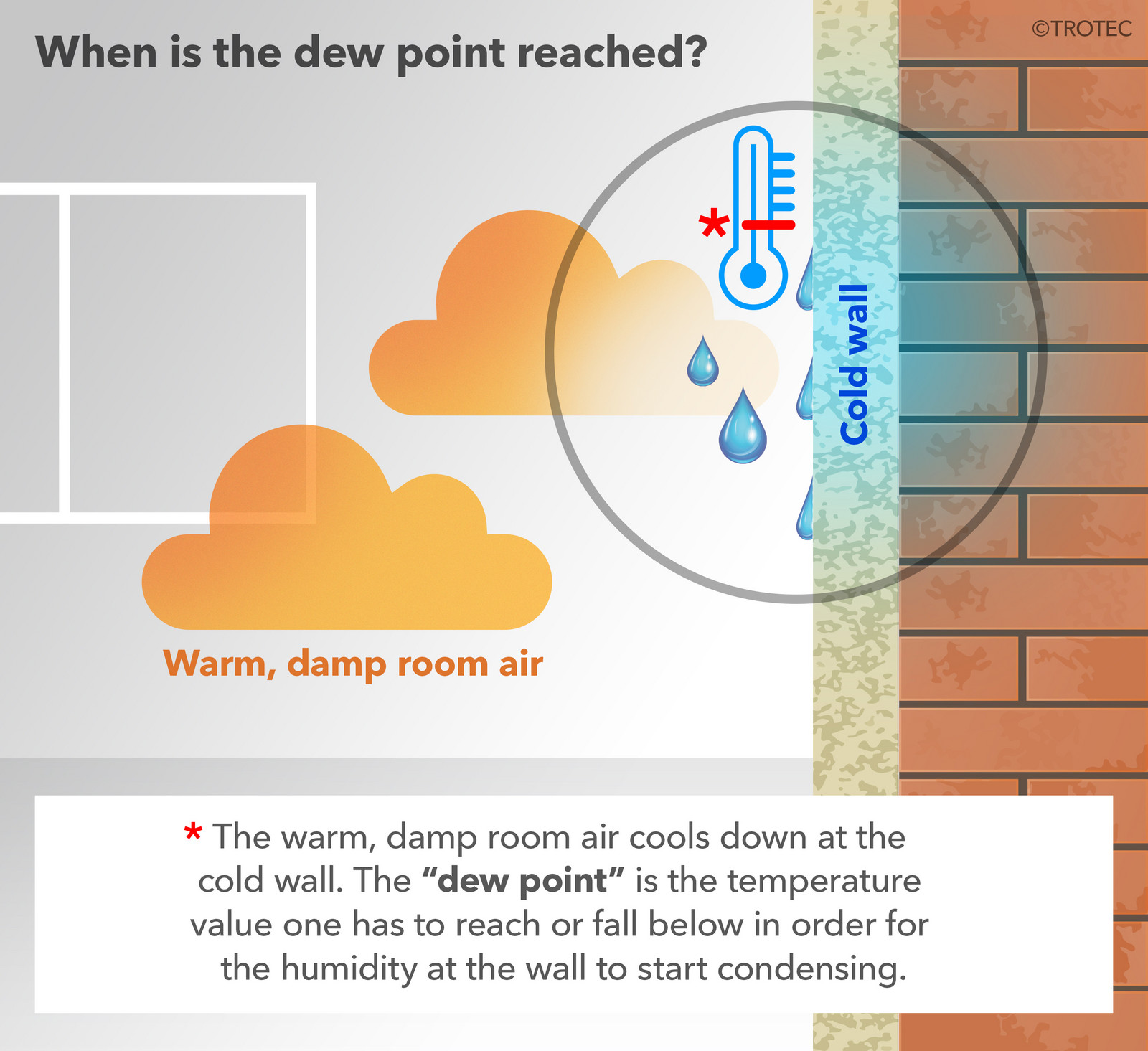 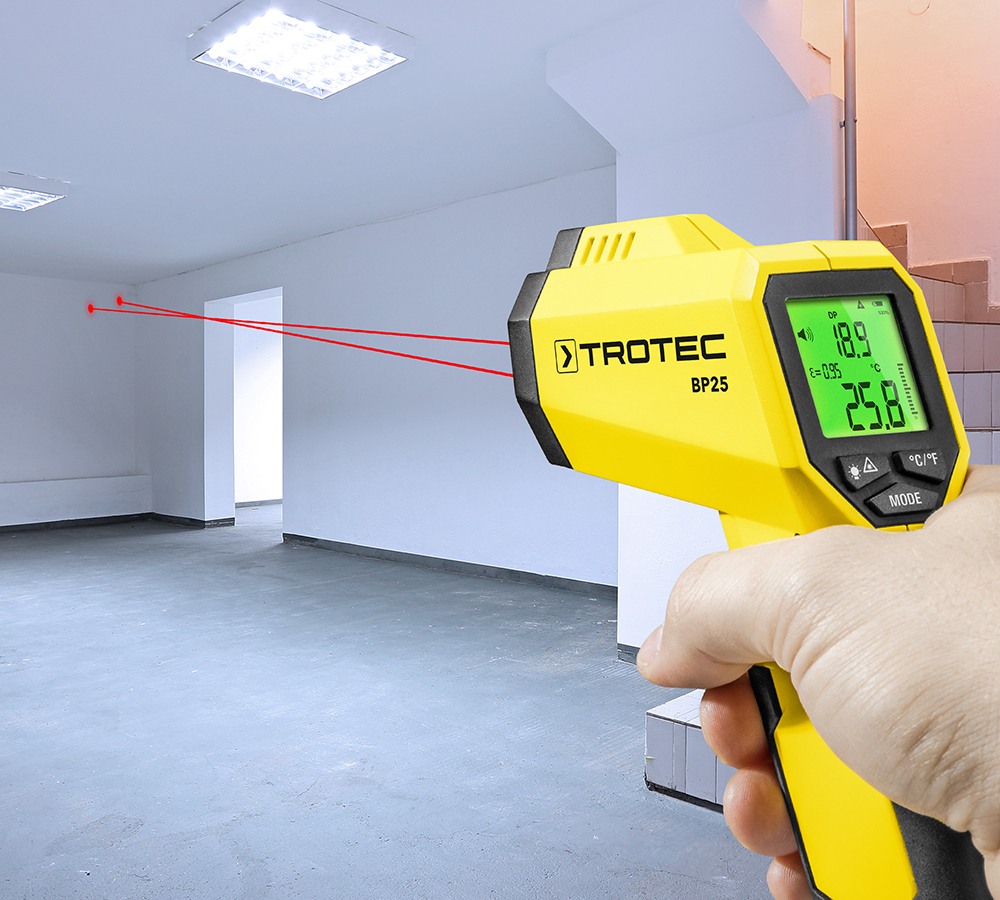 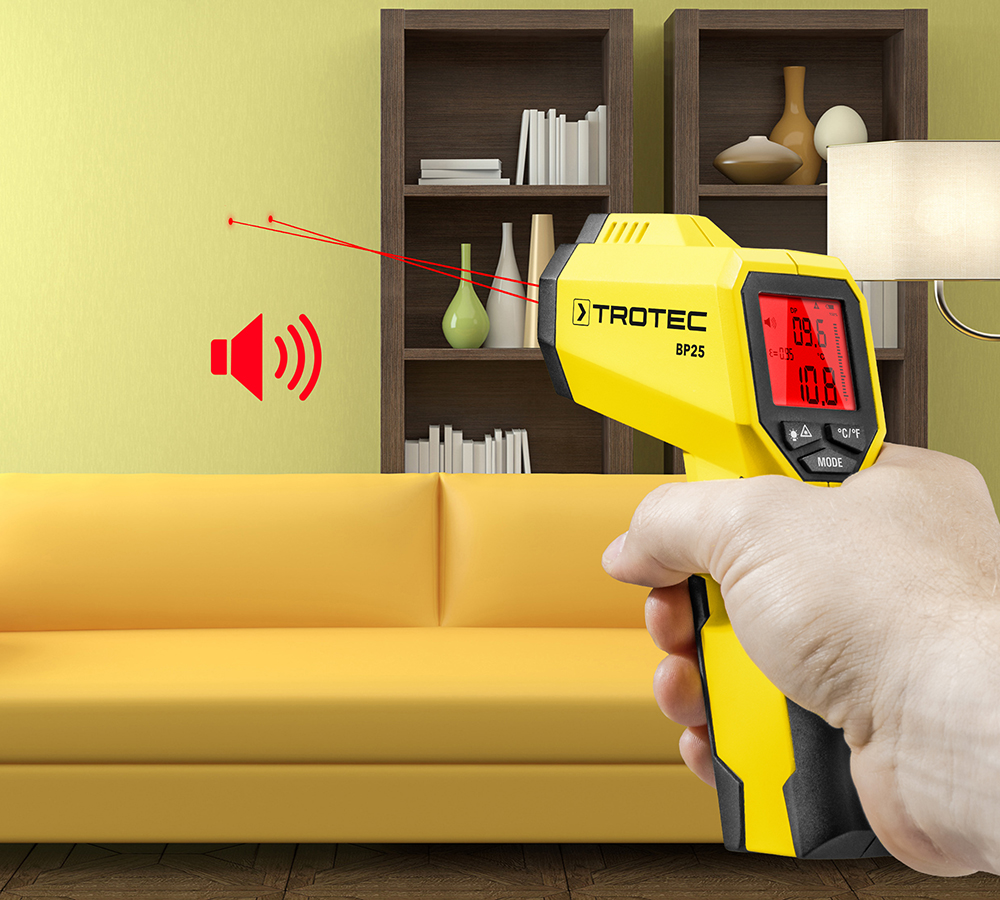 Owing to the broad temperature measuring range between -50 °C and 260 °C the versatile BP25 recommends itself for many more applications other than just the one as dew point scanner. The non-contact infrared measurement means you are reliably protected from too cold or too hot surfaces.

You can measure the temperature of heating systems, hot pipes, tanks, boilers, motor blocks, control boxes or cold stores without risking to get your fingers burned or stuck to an ice-cold surface. The BP25 can even be applied during the preparation of baby food – simply check the optimum drinking temperature of the baby bottle's contents from outside.

As you can see, the BP25 in practice-optimized Trotec design impresses across the board. With its compact dimensions and the light weight of merely 163 g the device can easily be carried along in your jacket pocket. Also, a convenient bag to be attached to your belt is included in the scope of delivery.

The infrared thermometer is powered by the supplied 9 V battery. Via the battery charging status indication on the LC display you can easily keep an eye on the current charging status. To ensure maximum battery runtime the BP25 is automatically switched off in case of non-use to save energy – as a result you can use the pyrometer dew point scanner BP25 for a vast number of measuring applications. 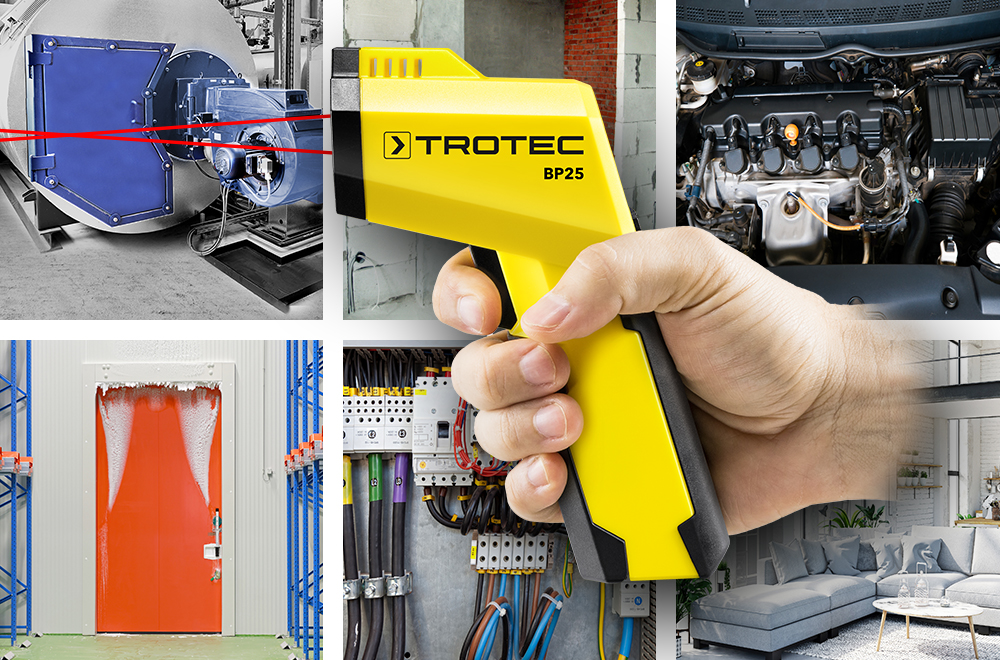 Tested and awarded with the rating GOOD

In the February of 2019 Trotec's dew point scanner BP25 has been tested and awarded for the best value-for-money ratio with the overall rating GUT (GOOD). In direct comparison with other infrared thermometers the BP25 could win the testers over.

Sophisticated in every detail, the infrared dew point scanner BP25 will not disappoint your expectations

Simply practical for commercial applications or use at home